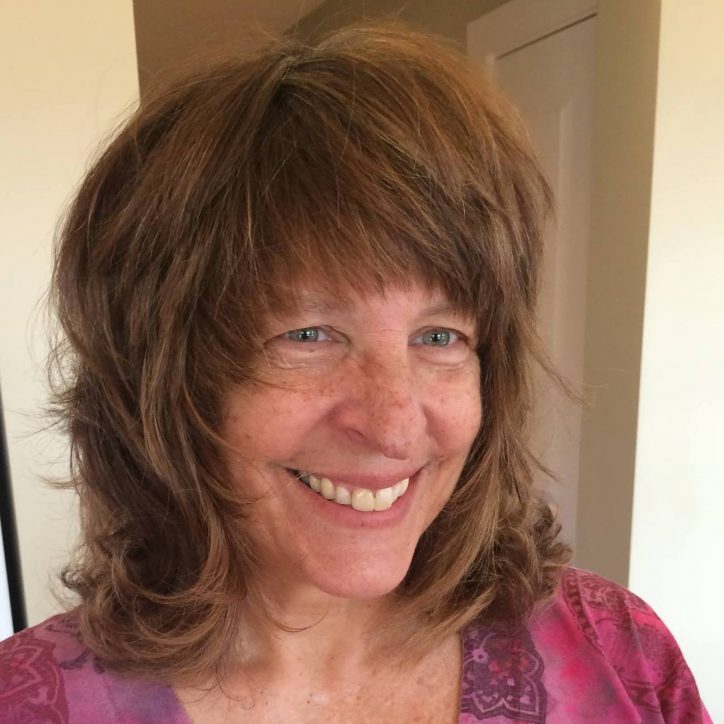 My mom cooked the old favorites like Kuchen! Home made dishes like Kuchen…with apricots or prunes spread on top of sweet dough with a sour cream, sugar & egg mixture poured on top and baked until just set were a weekly favorite.

Want to know more about me?  It seems like all our meals had some sort of dairy products to drink and baked into our meals. Our dinners included entrees covered with rich cream sauces, oh I loved cheese buttons baked in sour cream.

Bread was served with every meal, usually  with home-made jam. Dinner always ended with some sort of homemade cookies, pie or cake topped with ice cream.

About me and my GI problems!

This type of eating over time took its toll…and I began having belly pains and worse.   I had switched to vegetarian fare for many years since me teens, but that still included all the dairy I loved.  My Dairy Free journey began after many visits to the ER with belly pains which eventually led to bowel obstruction. With continued testing, they found pre cancerous colon polyps.

Why  did I have to go DAIRY FREE you ask? Dairy had really done a number on my GI system and I had to remove dairy for my gut to recover.   Oh how hard it was for me!

Going dairy free was very hard, giving up ice cream and cheese was almost impossible for me.  I even began eating VEGAN in hopes of  making my mind thing I couldn’t eat dairy when I ate vegan…so I would have to quite cheese and ice cream and the likes.   But I often fell far from my goal.

So I began in earnest to learn how to eat plant based and cook that way!

So I should have known better than to fall off the wagon, But I did.  Thinking I was feeling well enough, that I could add dairy back into my diet, as a special treat now and then.  BIG Mistake!

In January of 2012, I continued having abdominal pains and overall fatigue that no physician could seem to get a handle on.  I was so tired that some days I didn’t think I could get out of bed.   I’d nap for 3 hours every day in addition to over 9 hours of sleep at night.

I had arthritis and severe degenerative joint disease throughout my entire spine with bone spurs to boot! I had to have a thumb joint removed due to such severe arthritic pain that pain pills could not control the pain. I would drop things I was holding.

I had depression, OCD, Panic Disorder and Night Terrors.   I thought life is not suppose to be like this at my age!!   So I thought I’d see a Naturopathic Doctor.  She did many more tests to find out more about me and one test confirmed Gluten Sensitivity! Gluten Sensitivity…almost to the point of adrenal fatigue!  I was told I must eliminate gluten/wheat from my diet now!   That was a shock!  All the physicians I had seen never even mentioned the possibility of a gluten problem.

My cholesterol levels were higher than my physician wanted and he really wanted me to start on medications to bring my blood pressure and cholesterol down…..and I said, NO THANKS!  After seeing the naturopath with her findings I said to myself, “I’ve got to get serious about getting healthy through diet!”

I forgot to mention that my Vit D levels were low…. only 10 when they were first checked 8 years ago. I had been taking daily supplement of 5,000 D3 and every few months mega doses on top of that and my Vitamin D3 only come up to 22..over 8 years. And 30 is considered LOW!

So I began eating not only dairy free but gluten free, and  after only 1 month of being off gluten my Vit D levels had climbed to 42!!   I was told it was because my gut was FINALLY beginning to absorb nutrients correctly.   I was given other IV Nutrients including B Vitamins IV weekly.   Blood tests came back negative for Crohn’s Disease but other food testing showed continued evidence of Gluten Intolerance and Dairy Intolerance.  I was told I should never eat dairy again!  I began to get my strength back!

So now I eat pretty much Dairy Free and Gluten Free. You will find many VEGAN recipes along with DAIRY FREE recipes and GLUTEN FREE recipes. And, an occasional RAW recipe thrown in.  I don’t consider myself VEGAN because I do use honey as a sweetener and eggs, where Vegan’s will not do that.   I do also have fish, so I guess I’m also a pescatarian.  But I still love to cook vegan meals…they are healthy and tasty.  It’s not the label…its the quality of your food that is important!

My energy levels have increased, I don’t need to nap as often and I have no abdominal pains since I have been off of gluten and dairy!  IF I fall off the wagon and eat some dairy, then my belly does hurt again.

So I am basically sharing how I started over learning how to cook Gluten Free and be more vigilant in cooking dairy free.   It is a process and for some kicking dairy may be very easy.  For me having grown up with such a diet high in dairy of all kinds, kicking dairy has been much more difficult than kicking gluten.

I welcome you to come along on my Dairy Free – Gluten Free journey and share anything that has helped you!   Did I mention despite my eating eggs and fish, my cholesterol levels are now all well below normal average now.   That makes me really happy!

I am a retired Registered Nurse.   So it just seems natural to share things that have helped me along my way to a plant based diet.

Feel free to contact me via email with any questions or ideas for me to explore on this blog.

Please know that my blog is a safe place to have fun and share your ideas.

I live in Alaska and am married to my high school love.  We have 2 sons and 2 grandkids and 2 fur babies.  One named BayLee, a Shitzu and the other is a Cavalier King Charles Spaniel who was named Charlie by our grandson!

I am looking forward to getting to know you,  and I am so very glad you stopped by!